I’ve found myself being rather quiet recently. Conversation isn’t coming easily as I don’t much feel like being flippant. But in life, things have a way of catching you out don’t they? After the shock of last week I’d placed an advert on a degu site asking for a home for the three degu girls. I realised that it would be impossible for Julia to cope when I brought her home. As I’m quite allergic to them ( and the rats) there’s not much I could do either when it came to cleaning. But lets face it, I’m a man and never realise when things need cleaning anyway. I’d also added to the advert that I had the rats too and if anyone was interested………. All I’d specified was that I wanted someone fairly local so that we could keep an eye if needed and they didn’t have far to travel.

Unexpectedly I got an immediate answer and had messaged the young man who replied. Julia had been home a few hours when I mentioned the degus would have to go, I was pleased when she agreed (reluctantly) which was just as well because he arrived. Within half an hour the degus had gone and  I was sure it was to a good home. While he was here he saw the girls and said ” About your mention of the rats in the advert. I’d like them too.” I saw Ju’s face change and begin to crumple. As I went through to my room to get something she followed and tearfully asked that the girls not go just yet. What could I do? But, as luck would have it, he’d come in a car and the girl’s cage is quite a good size and would not slide into the car upright. I couldn’t let him take the cage on it’s back as the girls would be standing on wire rather than their solid base. After explaining that Ju was reluctant to say goodbye to them just yet I pointed out that they’d be safe and still here for him later. He left with that promise.

Since then, Ju has risen every morning without fuss to play with them before they go to bed. As she’s usually the one to open the cage while I make her a cuppa, the routine goes like this.

Bernie will go straight for the opening at the neck and wander down to her waist. Sometimes Ju sits down on the settee then until they emerge again. Then it’s up to the cage.

Penny will climb out onto the top of the cage and then onto Ju’s shoulder while Amy will tuck herself into one of the tubes they sleep in and wait to be lifted out. I will deliver Ju’s cuppa and then go back to take my meds. That done I have to pour myself a bowl of cereal because of the diabetes ( at least that’s the excuse) and go sit on the settee. Bernie will have been sitting on the arm in anticipation of my arrival. I have to give them each a shreddie on my spoon and they run off to hide and eat them. I daren’t take a mouthful yet as it’s not long before they return. Bernie first for her second one which suffices followed by Amy, Priya and Penny in quick succession and only after they’ve taken their third one can I carry on.

Ju uses this interval to take her tablets and a drop of her tea. My part in the performance is usually over in five minutes and it’s play time for a while with them raiding pockets for tissues to play tug of war with or running in and out of dressing gowns. There’s a blanket over the back of the settee and they love crawling under it. Eventually I’m off duty and Ju takes over again as the drinks lady.

Here’s Priya with a cup of tea. 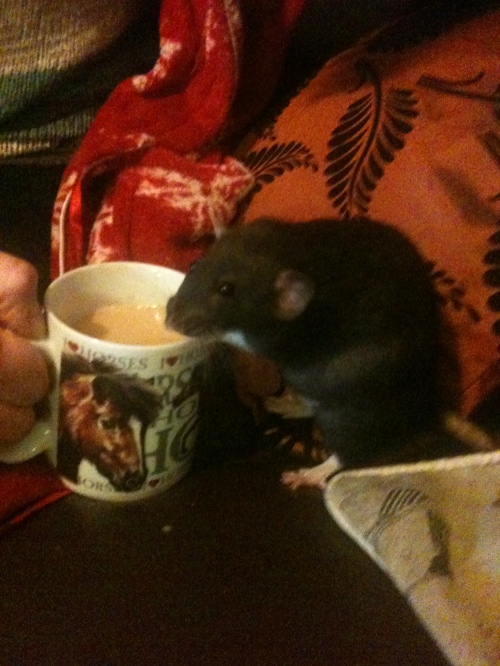 For the not too squeamish, here’s Penny getting her breakfast the cheeky way.

Me fighting for food with Penny.

There are some very distinctive styles of drinking. Penny will always cup the liquid in her hand and bring it to her mouth like a gentile lady. Bernie’s quite happy just to stick her nose straight in. Priya on the other hand tries both as if she’s unsure what she should do. Amy is always on guard so she’ll pass it from hand to mouth too. Then usually she’s straight up on her back legs to check for danger in the air. maybe she expects the Red Baron to appear.

Half an hour is about as much as Ju can take of playtime now but I’m so pleased she still shows the same interest. The biggest surprise for me is her determination to maintain the riding. So, on Wednesday afternoon we’re off to see if she can actually cope. We can only attend the RDA stables as they’ve got a mechanical hoist to get riders to horse level. Great news on the charity front though as our friends at a local cafe have a giant teddy bear they’re going to raffle off for Pennant Park Wishes and we’ve just heard that planning permission has been granted and building is about to start. All those that have donated to the Riding for the Disabled Charity at Pennant Park have my     undying thanks. I’ll let you all know how Wednesday goes.

Be kind to yourself and others.

Law that attracted me!