I had fully expected to be blogging at this time about the birth of my grandson. However, my daughter has her knees gripped tightly together to make sure my prediction of an early arrival is wrong.

I am therefore going to offer some insight into my acquiring mind.Just recently my eyes were glued to the screen in an effort to follow the progress of some Gadget sticks/canes. Though there are many varieties of these including ones with corkscrews, umbrellas, pencils and even binoculars, the ones I was looking at were swordsticks. In the UK, ebay is no longer allowed to sell swords or other weapons online. Calling swordsticks by the euphemism ‘Gadgets’ we have overcome that problem. The next problem however is affording them since the competition is hot.As with everything else you have to decide how much you’re prepared to pay and stick ( sorry) to it. As always happens, you decide how much you’re prepared to pay and exceed it. I exceeded my limit quite a bit and still lost them……………… Pause while I get a tissue and milk your sympathy to it’s limit.

I have not allowed the loss of the ‘Gadgets’to sour me to the evil creatures who bid against me. It merely embraced the idea of winning even more over their heads. I struck lucky on Monday with the winning bid for my third walking stick of the Meiji period, from 1868 until 1912 in Japan – after the name chosen by the young prince Mutsuhito, when he followed his father to the throne. See how educational I can be. 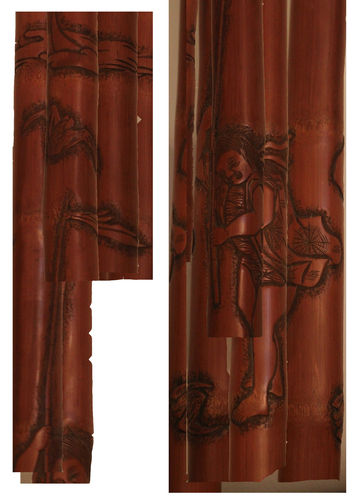 These pictures are of the third Meiji period stick I own. It depicts a man with a bat at his feet and one in the air around the flag he's carrying. It's a beautiful stick.

But, what has me drooling even more is a stick worthy of the Emperor himself. ( Damn, that means I've just raised the reserve price). This is carved by the hands of a master.Get your tissues ready, I'm about to show you pictures.

Isn’t that just tremendous.The work is fantastic. I’m bidding on this one at the moment and it scares me how much it might go for.Next weeks meals seems highly likely. But in fairness, who wouldn’t want to own this beauty?