Mischief at the Office and a Question of Comfort.

Well it’s been a week since I wrote though I can hardly say ergo it’s been a week since you read as I suppose other bloggers have kept you occupied and you may have read a newspaper or two. I’ve given up newspapers until they find something positive to write about so it’s possible I may never read one again. This week I’m going to repeat the exercise of giving you a blow by blow, or day by day account of the week. If you don’t care for this style of entry do let me know as it’s handy to know if I should be patenting a new sleeping aid or not.

Sunday. It was raining lightly and as Mike was here with his lady friend we decided to take her to see some of the local beauty spots. I have a great fondness for Betws y Coed and since I always have the casting vote we headed in that direction. Along the expressway of the A55 to Glan Conway corner then in to Glan Conway itself. We had the River Conwy running along to our right and still plenty of greenery around to frame it nicely. I forgot to get her to turn round and look for Conway Castle. Still, she had a running commentary, what more could she ask for except maybe a gag. Through Glan Conway and out the other side where we knew there was an Antique Centre we’ve heard of. We couldn’t see it so Mike detoured down a country lane to see if we’d missed it. In truth to call it a lane may have been a slight exaggeration as sheep struggled single file along it. Still, by breathing in we made it to the other end and came out on a piece of road 4 miles later about 100 yards further than where we’d left it. We found the centre and it was closed. I sidled away from the blue air in case I was contaminated. Back in the car we carried on past beautiful Bodnant Gardens famed for it’s laburnum arch and extensive grounds until we reached the small town of Llanrwst…. For all you novices out there may I suggest now you don’t try pronunciation of these place names as I can’t be held medically responsible. Ready? In Llanrwst is the fantastic tearooms called Tu Hwnt i’r Bont which translates as the house over the bridge so over the bridge we went. 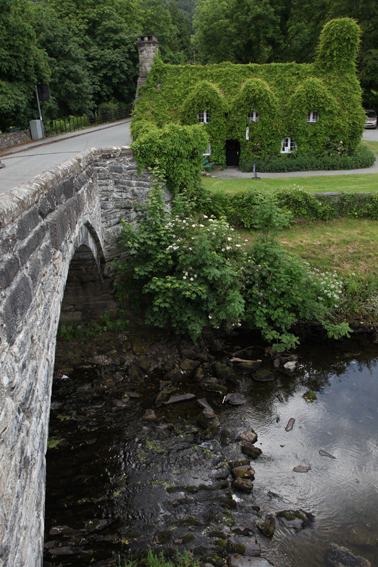 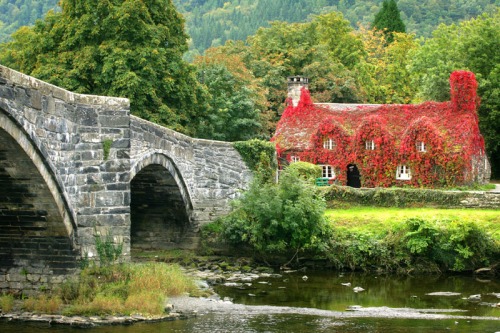 Rose loved both exterior and interior which is heavily beamed. Upstairs where to loo is can be found a tiny bath which would have been sat in rather than laid in that’s if anyone could bend themselves low enough in the eaves to get in at all. It’s famed for it’s cream teas but given it was 11.30am and approaching lunch time we didn’t indulge in. Coming out of the cafe to find it still raining we turned the car right and headed for our next point of reference Gwydir Castle ( feel free to pronounce the second word) or Castell Gwydir built circa 1500 by the Wynne family. 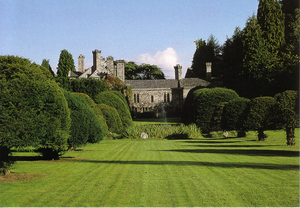 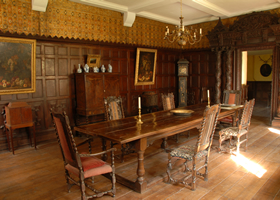 We decided to push on rather than stop but for a long way you can hear the odd screams of the famous white peacocks which reside at the castle. Don’t you think the dining room is magnificent?  For a long time the castle was going in a state of disrepair until bought by a young couple who dedicated themselves to restoring it and finding as much of the original furniture as possible. They worked miracles and you can go round the house to view it.

Less than ten minutes later and we were in Betws y Coed where I managed to sate my need for shops and we were served up an excellent lunch. we managed a mooch round a few more shops afterwards. 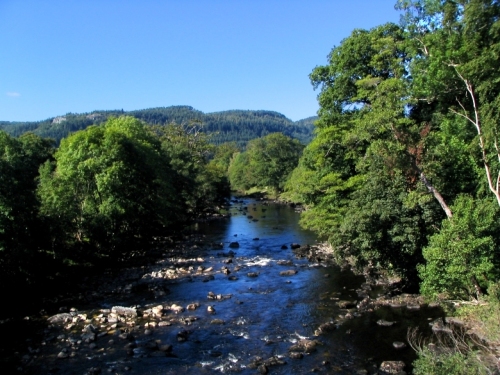 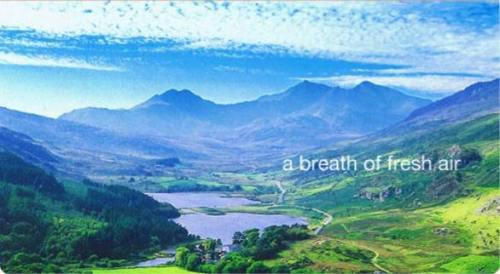 It was too soon when we had to return home so Mike and Rose could pack to return to the Midlands and their normal lives. I hate that happening.

Monday. I needed my tool roll on Monday. Just now I can’t remember why but at the time I searched every room for it and so did everyone else including the milkman and postman as I dragged them in off the streets to look. Mike and I had used it less than two weeks before and it couldn’t have gone far. The search had to come to an end when my ‘Responsible Adult’ arrived to ensure I went to the doctors. Yvonne escorted me in ( because she doesn’t trust me not to play truant’ but at least didn’t enter the surgery with me.I got the politest bollocking I’ve ever had for being rather late ( 12 months) for my review, a ticking off for not telling her about my swollen legs and feet with bronchitic chest before now and was mildly admonished for my high ( stratospheric?) BP. All in all not too bad then. I left with a new prescription for increased BP tabs and packets for blood tests next month. It would have been nice to go home at that point but we went for a nice cuppa before having to go for that day’s blood tests. I sat there thinking she’d forgotten she’d put a needle in at first but couldn’t run because  Ugo was in the doorway. She took 3 phials in the end or what Tony Hancock would have described as an armful. We went for lunch so I could be seen to be taking my meds without earning a clip round the ear. My grandson was of course present for all this but I think you lot can wait till the end for a picture.

Tuesday. I wasn’t very well and indeed couldn’t even be bothered getting dressed. My nephew came and cracked on with painting doors and ceilings and I told him what I’d decided regarding the lounge wall. Keep up people, I told you about this last week. I’m having the photo mural wallpaper and I’m also having the two inner lounge doors papered to resemble bookcases. David was all in favour of it. When he left that afternoon I really felt alone and bored.

Wednesday. Whether I liked it or not I had to get up and get dressed . I needed bread and something to feed David for lunch. I turned my chair sideways and bent low with a shoe horn to get my shoes on when a spot of green caught the corner of my eye. Turning fully round still in the same low position I caught sight of my tool roll. About 6 weeks ago I’d bought an 8 gang plug for my bedroom and not connected it yet. It was on the chest beside my bed. On top of that was some ironing I’d done over the weekend and my toolroll was under it all. Needless to say I’d not used the tools in here and there’s no reason it should end up underneath something that’s been in place for 6 weeks now. Since I’d completely forgotten what I wanted the tools for I can only assume it was a job Ju didn’t want me to do. My brother came for his game of Scrabble in the evening and brought my nephew with him. It was great because I see very little of him but also because with three of us we could play Balderdash which I’m telling you now, just because I won both games does not mean I’m a bigger liar than either of them as they claimed.

Thursday. I went into my computer this morning to check the lottery results. Every time I entered Lottery.co.uk  it brought up the correct site but refused to let me enter. A message came to say I was blocked by my ISP because it was a gambling site. I’m supposed to have set a block on access to sites like this. I haven’t !! I went to the ISP and put the block on and then removed it to see if that did the trick. It didn’t. I had to check the results with the local shop when I went. Ju playing tricks on me again? I really don’t know but when I tried again on Saturday I had no problems. The paper for the lounge doors arrived today. I do so like my Ebay.

Friday. Today MuJo came for a visit. I don’t know whether I’m still under the weather but his conspiracy theories were a bit wearing instead of amusing this time.  Still, we managed to have his favourite chip shop lunch and a trip to my favourite coffee house afterwards. . It’s not our usual way at all , generally there’s lots of humour throughout the day. The strips of picture for the lounge wall arrived ready for David to start next week. It will be Wednesday before he’s here so my impatience will have to be curbed somehow.

Saturday-Today. My niece arrived at about 7.30 this morning to take me shopping. I’d got everything out ready for the dustbin men so was ready and raring to go. Carrie-Anne is a laugh a minute joker and great fun to be with. She had me so relaxed that we shopped quite slowly and I even bumped into someone I used to work with. Instead of the usual freezing and stuttering I think I handled it quite well. Karen didn’t have to jump in and save me which must have been a relief for her. Mind you, she was pushing her luck today, she decided she might as well get some jam while she was there and somehow filled more than half MY trolley with her stuff. I struggled to get my shopping in. What I didn’t understand was how with more than half the contents, her JAM cost £52 and my few staples cost £71.00. She stayed with me until about 12/30 today and then left for work. Sitting at my computer I heard a crash and looking out saw that a new three frame picture of Reuben had jumped off the wall, hit a few things on a chest below and scattered them all over yet the frame had slipped behind the chest undamaged. Tomorrow Ju I’m going to look for Picture wire !!  I had a visit this evening from a young man I used to work with. I’ve mentioned him before but probably about last Christmas. He’s the nicest person you could imagine. This year he’s getting ready for his final presentation at University which is on Schizophrenia. That must be a very hard presentation to make.

I have a question I need to ask. One person has said that my sign off on blog comments of Huge Hugs makes her a little uncomfortable. Since I mean no harm and have been signing that way for a long time because I promote hugs I thought it only right to ask. Do I make you uncomfortable? Do you feel it inappropriate?

Any way. You’ve been very patient so I’m going to shut up now and leave you with a picture sent to me earlier. Yvonne, Ugo and a certain young gentleman are at a wedding in Oxford today. Best dressed baby maybe? 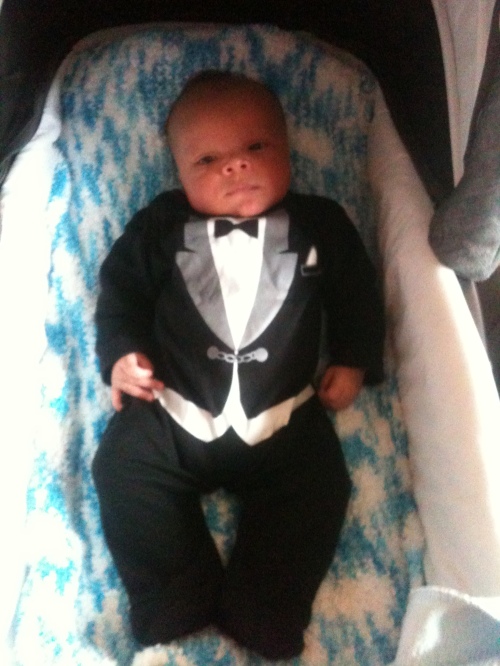 Law that attracted me!