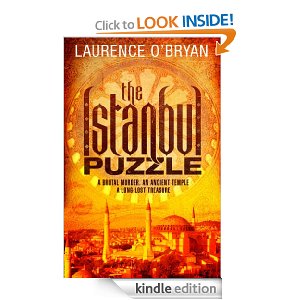 Welcome to an Interview with… Laurence O’Bryan

Buried deep under Istanbul, a secret is about to resurface with explosive consequences…
Alex Zegliwski has been savagely beheaded. His body found in an underground archaeological dig, hidden beneath the holy temple of Hagia Sophia in Istanbul.
When Sean arrives in the ancient city to identify his colleague’s body, he is handed an envelope of photographs belonging to Alek and soon finds himself in grave danger. Someone wants him dead but why?
Aided by British diplomat Isabel Sharp, Sean begins to unravel the mystery of the mosaics in the photographs and inch closer to snaring Alek’s assassin. Evil is at work and when a lethal virus is unleashed on the city, panic spreads fast. Time is running out for Sean and Isabel. They must catch the killer before it’s too late.
What made you decide to write this book?

My fascination with Istanbul.

Where did the title come from?

There is a genuine puzzle at the heart of the story.
Do you always write in this genre?

What was your inspiration to write and when did you start?

I started 12 years ago. I wanted to write stories since falling in love with books as a young boy.

I had a dream 15 years ago about reaching for a book in a high up cupboard. It struck me that this might mean I should finally write what I’d wanted to write.

What was your destination to publishing? ie are you self published.

Chapter 1
Icy sweat streamed from Alek’s pores. He’d been optimistic. Way too optimistic. Kidnapping in the Islamic world was almost always a form of extortion – so he’d been told. But the appearance of the knife, big enough to gut a bear, had changed everything.

He shook his head in disbelief. Only an hour ago he’d been happy in his hotel room, a place that was now as unreachable as a childhood dream.

His heart banged against his ribs as if it wanted out. He looked around. Was there someone else in the pillared hall he could appeal to?

The bead-like eye of the video camera blinked on. Alek’s arms and legs jerked, straining at the orange nylon rope binding him to the smooth pillar. Musty air filled his nostrils. He was trembling, as if he had a fever.

When the two men had entered his room, he’d gone with them quietly. How stupid he’d been. Why hadn’t he shouted, roared, jumped for the window? He’d seen the look in this bastard’s eyes, as hard as stone. Now it was too late.

His voice echoed. A hand held his shoulder. He threw his head from side to side, straining his neck. The rope around his ankles, knees and chest held him tight. His pulse thumped against it.

The knife glistened in the air like falling water. Only the prayer his mother had taught him could help him now.

Holy God, Holy and Mighty, Holy and Immortal, have mercy on us!

He closed his eyes. Icyness hit his neck. Then a hot torrent fell on his chest. Warmth gushed down his legs, soaking him. A foul smell rose around him.

And an eerie calm descended.

He looked around the ancient hall, taking in its forest-like rows of pillars. The entrance he’d found must have been sealed up over five hundred years ago, before the ancient city of Constantinople above him fell to a Muslim army and its name was changed to Istanbul. There were treasures down here any museum director in the world would beg for. But he wished he’d never found the place.

He stared at the aluminium tables nearby. What he’d seen on those tables had terrified him.

A black mist rushed towards him. Would Sean find out what had happened?

A minute later the two fountains of blood, two foot high at their peak, from the left and right arteries emerging from Alek’s chest, bubbled like cooling coffee percolators. The flesh around them shone with a silky gleam. But Alek’s eyes were closed and his face was peaceful.

The above is Chapter 1 of The Istanbul Puzzle. It was released in the UK & Ireland January 19, 2012. It is available for order on the right and from all good booksellers.
It’s very tempting to say may the luck of the Irish be with you Laurence but since I know how much hard work can go into writing it’s easier to say may you be in the right place at the right time for Harper Collins to make you Number 1. But good luck anyway with Numbers 2 and 3.

3 responses to “Interview with Laurence O’Bryan”