MY BOOKS. The Barsetshire Diaries and More

I started writing The Barsetshire Diaries when I was 60. The first My Barsetshire Diary came about after I’d responded to an email from a friend asking how my day had been. For fun I responded as though it was a diary entry. She asked for more.

At the same time my wife took a chapter a night to bed to read. If I heard laughter I knew it was OK. She demanded more. I was being harassed into writing. Though I enjoyed writing the first book I wanted to try something a little different for the second, but leaving myself a chance to continue with the Barsetshire tales if possible. I therefore left a question at the end of book one as to whether one of the characters might change and then away I went to please myself.

The introduction to Lord David

In the way of  the hit films over the years I decided to create a prequel. Star Wars did it and even Lord of the Rings did The Hobbit last. The Queen’s Envoy was born which tells he tale of my early retirement from my employment to take up the Title and inheriting an unexpected job from my cousin as well. That of an unofficial Queen’s Envoy for HMG tasked with sorting out a variety of problems all over the World. I also had to extricate myself from some very sticky situations with ladies as well. I was the poor man’s James Bond minus all the gadgetry and the gift of the gab.

Book three saw a return to the original story with the usual characters. The imaginatively titled More Barsetshire Diary gave me chance to add more flesh to the bones of the Dreaded Edna, introduce Triple D ( Diana the Dowager Duchess of Cheam) and not remove Oscar the alarm cat from his self proclaimed starring role.

This leads me nicely on to the fourth book published in August 2013 which is called Memoirs of a Superior and as the title indicates is the story of Oscar ( the latter years) sharing his adventures and offering his homespun wisdom to the kittens of tomorrow. Readers are forewarned not to let their Superiors get their hands on this as I accept no responsibility for Oscar’s advice. 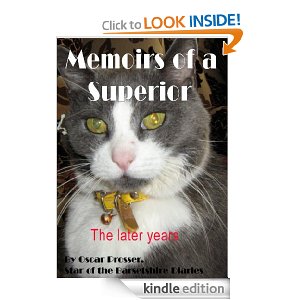 All books are available from Amazon as either paperbacks or Kindle ebooks though at the moment I’m waiting for Memoirs of a Superior to arrive there as a book .

In February 2014 this book was added to my lists. It was intended to be  private book done for my grandson at my daughter’s request. However, I was asked if I’d open it up for sale by a few people. Not many have bought it but that maybe because they read most of the poems free previously as I was  working on the book.                                           Anyway, it’s a book of fairly short poems with animal subjects, maybe a little anarchic and based on some poems I wrote for my daughter when she was young. I had to write a few more to create a book so the brain was strained again..

51 responses to “MY BOOKS. The Barsetshire Diaries and More”

A very mediocre writer with a very extravagant dream.

a cooking pot and twisted tales

Thoughts and Tales...A Lifestyle Blog with a Zing.

Retired, not expired: words from the after(work)life. And music. Lots of music!

Normalising the conversation about Grief.

Helping you to find the gold nuggets amidst the dirt, sand and pebbles of life!

On The Fence Voters

I speak my heart out.