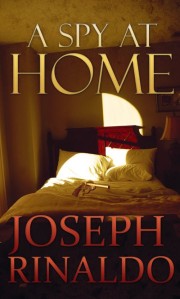 I am Joe Rinaldo, and I’ve written nine novels, one of which, A Spy At Home, is available on Amazon. By day I work as Credit and Financial Manager for a heating, ventilating, and air conditioning distributor; we sell to the guys that come to your house. When I first started writing, I thought being a numbers guy would make me an oddity as an author. That’s proved to be wrong. The more people I meet in this industry, the more I run across accountants and CFOs. Apparently, creativity infects a variety of people. Of course, I have the same dream as other writers. I hope my book sells a million copies and becomes a smash hit movie. Selling ebooks for ninety-nine cents isn’t the get-rich-quick scheme I thought it was before being published. It’s been a lot of work.

A retired CIA operative comes to believe he wasted his professional life not only promoting questionable American policies, but missing life with his family. To ease the pain he diverts millions that the CIA expected him to use funding a coup attempt that would establish a pro-American government in an African country. Seeing the coup would fail, Garrison decides to save the money for himself. You, the reader, can decide if he’s a villain with evil intent, a hero with altruistic motives, or a regular guy sick of working for peanuts in a dangerous environment.

Back at home he and his wife look forward to their golden years being luxuriously comfortable and opulently relaxed. Unfortunately, after his wife dies in a tragic accident, he must learn all that she knew about caring for Noah, their mentally retarded son. After a life of planning for contingencies, the former spy must deal with the possibility that he may die before his son. Who will care for the son when the dad spent a life out of the country and now has no one to lean on?

What made you decide to write this book?

My wife wrote a short story about a single woman with a mentally retarded daughter where the mother was worried about dying first. I wrongfully and maliciously stole her story and added about 230 pages in what became A SPY AT HOME. As for how Garrison’s and Noah’s specific story came to me, I honestly have no idea. I guess it’s a combination of reading too many fiction and nonfiction spy stories mixed with wondering what would happen to my own daughter if my wife and I died.

Where did the title come from?

The title kind of found me. I bounced several ideas for titles off my wife, and this was the only one that really fit the story completely.

Do you always write in this genre?

The genre of my books is very hard to pin down. My wife and I have searched numerous times for standardized publishing industry definitions with no success. As silly as that may sound, especially for a person who wants to deal in words as a career, genres are hard to define. A Spy At Homecould be considered contemporary fiction, mainstream (this sounds like a synonym for dull), thriller, suspense (what’s the difference between thriller and suspense? Shouldn’t you be thrilled reading a suspense novel, and shouldn’t you wonder what will happen next in thrillers?), drama (any book without intense turmoil probably won’t be worth reading), or adventure (my main character travels to another continent; that’s adventurous, right?). Where my books fall in the narrow definitions of the publishing world is a mystery to me; I do know I have tried to make the characters interesting and multi-faceted, moving through difficulties in their lives.

What was your inspiration to write and when did you start?

The actual impetus for me to begin writing came while I was reading Three Weeks With My Brotherby Nicholas Sparks. When I got to the part where he received a million-dollar advance, I thought, “Holy cow! He’s a good writer, but I know I can do this, too.” I’ve been writing since that day in 2004.

What was your destination to publishing? ie are you self published.

We tried for years to find a publisher or an agent, without success. I really believe that because my books fail to fall in a specific genre, publishers shied away from them. They are corporations that have specific slots to fill, and my books are too good to be narrowly defined by genre. If I couldn’t get a free copy, I’d buy my own book; just kidding. The self-publishing route is far more difficult than I ever expected it to be. The hardest part is spreading the word that you have a book available. The internet is so congested that shining through and getting buzz about your book is very difficult.

We had this professionally designed, which was an expense we did not foresee when we first entered the world of self-publishing. The reason we hired a web designer was because the free web sites looked so bland. If you do visit it, we hope you like it.

Any links to the book/books

Excerpt from A SPY AT HOME:

Since you’re reading this, I’m dead. A great many years of my life I worked for the CIA, Central Intelligence Agency, for the federal government of the United States of America. I didn’t say proudly worked, because I wasn’t proudly serving the entire time. Don’t yawn; you haven’t read this one before. The book won’t self-destruct; this isn’t the same reworded spy novel you’ve read a dozen times where the hero does the right thing in the final scene, and everyone good lives happily ever after, and the bad guys go to jail. To be honest with you, I don’t know how much spy stuff will be in this book. The important thing for you to know is that the author’s royalties from this book support Noah, my son. He was a surprise, but not the kind of surprise you’re thinking. You’ll meet him later, and I assure you everyone will like him. Everyone always does. We’re complete opposites. He’s innocent, and I’m not.

As for me, you’ll get to know me. I’d really like to hear what you think about me, but I was too chicken to release this while I lived. You’ll have to judge me posthumously. Most people tell stories using themselves as the conquering hero. I tried not to do that; in fact, I’m certain you won’t conclude I’m any kind of hero. On the other hand, I hope you don’t end up hating me. My excuse for not presenting this during my lifetime was National Security. You know the term that forgives all government workers for being dishonest and secretive.

In case I forget to say it later, thanks for the money. You paid me a lot of dough over the years for my salary, and one big lump sum, which you’ll hear about in detail. Being a CIA operative means everything I do is covered under the veil of National Security. Don’t worry; nothing you’re going to read will put any American agents in danger. I’ve been out of the game for a long time, and most of the governments I helped create or defeat have no one left alive who can figure out my real identity…

Some of you might recognize part of this story from newspaper accounts in Nashville, Tennessee. I’m the guy who shot his wife; again, not for the reason(s) you think. We’ll cover that in detail, too. You’ll hate me for shooting someone who gave so much to the world and always thought only of others. I hate myself for it…

My death happens at a shootout with a terrorist group from a small Middle Eastern country where I help thwart that group’s coup against the country’s President, who secretly sympathizes with America’s precarious oil dependency. Just kidding – how in the hell could I possibly know that while I’m writing this? I probably die alone of some common disease in a nursing home with so many beds that all the patients become anonymous. Who cares? (Other than Noah if he survives me)”

Many thanks for spending the time to do this interview Joseph, The very best of luck with your books.

The home of all things books

Personal ramblings and rants of a somewhat twisted mind

Words are art on paper, and for me they are the seeds of my soul.

TLDR; my life in bits and bites

Empowered by a woman, for women.